Posted at 09:15h in Danakil by Ethio Danakil Tours
1 Like

Sun-cracked salt flats stretch like blinding-white crazy paving towards a shimmering flat horizon. Salt-bearing camel caravans traipse mirage-like across grassless plains of rock and sand swept by a merciless gale known as the Gara, or Fire Wind. Volatile volcanoes rise into the cloudless desert sky, their calderas cradling bubbling cauldrons of molten lava, or brooding hyper-saline crater lakes. Explosive geysers feed sulphurous pools enclosed by strange pastel-hued crystalline formations. These are sights typical of the Danakil: one of the most harsh and brutal landscapes anywhere on earth, but also a place of rare geological fascination and immeasurable beauty to those few adventurous souls fortunate enough to spend time there. A true desert that stretches across northeast Ethiopia for tens of thousands of square kilometers, the Danakil is also one of the lowest-lying and hottest places anywhere in the planet, dropping to 116m below sea level, while temperatures frequently soar above 50 degree Celsius. It lies in the northern part of Afar, a region named after its pastoralist inhabitants, who traditionally eked out an income as herders and seasonal salt miners. Their salt was transported by camel to the highlands by Tigrian Caravaneers. Camel caravans still operate in the region, as they have for millennia, but for most visitors the biggest highlight of the Danakil is Erta Ale, a climbable volcano that encloses the world’s oldest permanent lava lake. 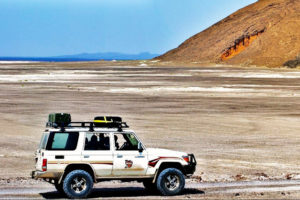 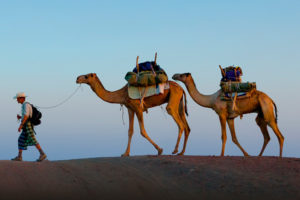